The pump performance curves characterize the performance of ESP pumps. This article will detail the technical aspects related to these curves and will answers the following questions: How pump performance curve is obtained? How to plot it? What are the downthrust and the upthrust? What is the recommended operating range of the pump?

The published pump performance curve describes the performance of particular pump (or stage). It shows the discharge head developed by the pump, brake horsepower (power consumption curve), and efficiency of the pump as a function of flow rate. It is an experimental curve given by the manufacturer and obtained with freshwater at 60 °F (S.G. = 1) under controlled conditions detailed in API RP11 S2. These curves are commonly available for both 50 Hz and 60 Hz operation and must represent the operation of one or more stages of each pump curve (the number of pump stages must be clearly indicated on the pump chart).

Brake horsepower (BHP): the power required by the pump corrected for a fluid with a S.G. = 1.

Effect of axial forces on the ESP performance:

All centrifugal pumps develop axial thrust. Axial thrust is an important factor in establishing the recommended operating range of a centrifugal pump. Refer to following Figure, which depicts a typical thrust curve vs. capacity over the entire range of a particular pump type. It shows where up-thrust and down-thrust occurs in relation to the head capacity curve.

Every centrifugal stage is designed to produce at a certain flow rate range. In addition, there is a best efficiency point (BEP) for every stage. Furthermore, every stage type has a recommended range. In the previous typical pump performance curve, the recommended range is indicated by a blue color area (from 630 to1200 m3/d). Across the operating range, the forces on either side of the impeller shroud are such that they minimize the amount of thrust that would be transmitted to the diffuser pads. 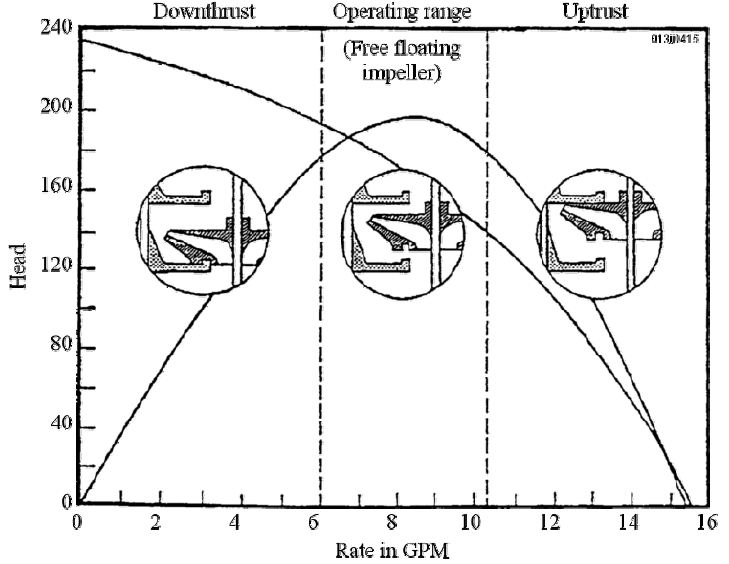 NB: Thrust generated by a multi-stage centrifugal pump is usually supported in one of two ways: Floater Construction or Compression Construction. Both technologies are detailed in the article: “Compression pump vs. Floater pump “.

In conclusion, any given pump must be operated in the Recommended Operating Range defined by the two boundary rates described previously (downthrust and upthrust limits).

As the name suggests “ Pump Intake ” is where the well fluid enters the Submersible Pumping System. Care should be taken when […]